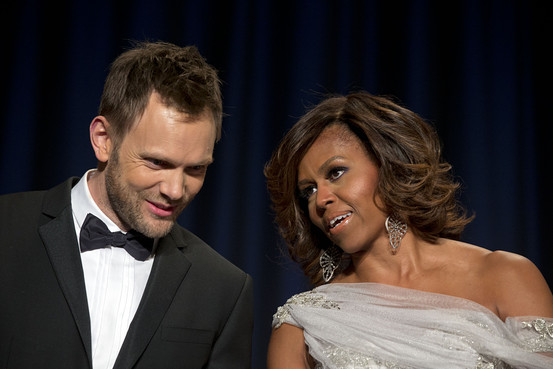 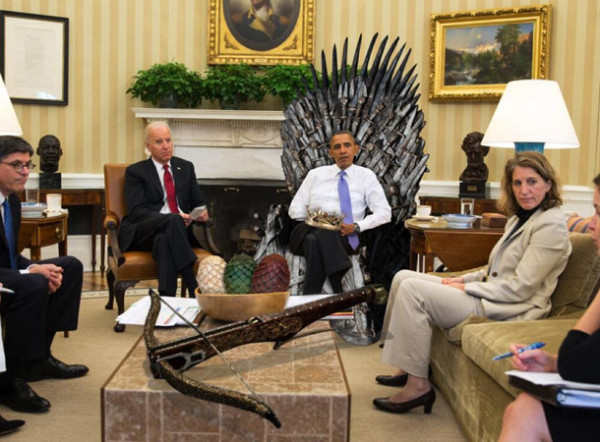 THE PRESIDENT:  Thank you so much, everybody.  Have a seat, have a seat.  Before I get started, can we get the new presidential setup out here?

It was worked before.  (Laughter and applause.)  That’s more like it.

It is great to be back.  What a year, huh?  I usually start these dinners with a few self-deprecating jokes.  After my stellar 2013, what could I possibly talk about?  (Laughter.)

I admit it — last year was rough.  Sheesh.  (Laughter.)  At one point things got so bad, the 47 percent called Mitt Romney to apologize.  (Laughter.)

But rather than dwell on the past, I would like to pivot to this dinner.  Let’s welcome our headliner this evening, Joel McHale.  (Applause.)  On “Community,” Joel plays a preening, self-obsessed narcissist.  So this dinner must be a real change of pace for you.  (Laughter.)

But, look, everybody is trying to keep up with this incredibly fast-changing media landscape.  For example, I got a lot of grief on cable news for promoting Obamacare to young people on Between Two Ferns.  But that’s what young people like to watch.  And to be fair, I am not the first person on television between two potted plants.  (Laughter and applause.)

Sometimes I do feel disrespected by you reporters.  But that’s okay.  Seattle Seahawk cornerback Richard Sherman is here tonight.  (Applause.)  And he gave me some great tips on how to handle it.  Jake Tapper, don’t you ever talk about me like that!  (Laughter.)  I’m the best President in the game!  (Laughter.)

What do you think, Richard?  Was that good?  A little more feeling next time?

While we’re talking sports, just last month, a wonderful story — an American won the Boston Marathon for first time in 30 years.  (Applause.)  Which was inspiring and only fair, since a Kenyan has been president for the last six.  (Laughter and applause.)  Had to even things out.  (Laughter.)

We have some other athletes here tonight, including Olympic snowboarding gold medalist Jamie Anderson is here.  We’re proud of her.  (Applause.)  Incredibly talented young lady.  Michelle and I watched the Olympics — we cannot believe what these folks do — death-defying feats — haven’t seen somebody pull a “180” that fast since Rand Paul disinvited that Nevada rancher from this dinner.  (Laughter.)  As a general rule, things don’t like end well if the sentence starts, “Let me tell you something I know about the negro.”  (Laughter.)  You don’t really need to hear the rest of it.  (Laughter and applause.)  Just a tip for you — don’t start your sentence that way.  (Laughter.)

Speaking of Rand Paul — (laughter) — Colorado legalized marijuana this year, an interesting social experiment.  I do hope it doesn’t lead to a whole lot of paranoid people who think that the federal government is out to get them and listening to their phone calls.  (Laughter.)  That would be a problem.  (Laughter.)

And speaking of conservative heroes, the Koch brothers bought a table here tonight.  But as usual, they used a shadowy right-wing organization as a front.  Hello, Fox News.  (Laughter and applause.)

I’m just kidding.  Let’s face it, Fox, you’ll miss me when I’m gone.  (Laughter.)  It will be harder to convince the American people that Hillary was born in Kenya.  (Laughter and applause.)

A lot of us really are concerned about the way big money is influencing our politics.  I remember when a Super PAC was just me buying Marlboro 100s instead of regulars.  (Laughter.)

Of course, now that it’s 2014, Washington is obsessed on the midterms.  Folks are saying that with my sagging poll numbers, my fellow Democrats don’t really want me campaigning with them.  And I don’t think that’s true — although I did notice the other day that Sasha needed a speaker at career day, and she invited Bill Clinton.  (Laughter.)  I was a little hurt by that.  (Laughter.)

Both sides are doing whatever it takes to win the ruthless game.  Republicans — this is a true story — Republicans actually brought in a group of consultants to teach their candidates how to speak to women.  This is true.  And I don’t know if it will work with women, but I understand that America’s teenage boys are signing up to run for the Senate in droves.  (Laughter.)

Anyway, while you guys focus on the horserace, I’m going to do what I do — I’m going to be focused on everyday Americans.  Just yesterday, I read a heartbreaking letter — you know I get letters from folks from around the country; every day I get 10 that I read — this one got to me.  A Virginia man who’s been stuck in the same part-time job for years; no respect from his boss; no chance to get ahead.  I really wish Eric Cantor would stop writing me.  (Laughter.)  You can just pick up the phone, Eric.  (Laughter.)

And I’m feeling sorry — believe it or not — for the Speaker of the House, as well.  These days, the House Republicans actually give John Boehner a harder time than they give me, which means orange really is the new black.  (Laughter and applause.)

But I have not given up the idea of working with Congress. In fact, two weeks ago, Senator Ted Cruz and I, we got a bill done together.  And I have to say, the signing ceremony was something special.  We’ve got a picture of it I think.  (Laughter.)

Look, I know, Washington seems more dysfunctional than ever.  Gridlock has gotten so bad in this town you have to wonder:  What did we do to piss off Chris Christie so bad?  (Laughter and applause.)

One issue, for example, we haven’t been able to agree on is unemployment insurance.  Republicans continue to refuse to extend it.  And you know what, I am beginning to think they’ve got a point.  If you want to get paid while not working, you should have to run for Congress just like everybody else.  (Laughter and applause.)

Anyway, this year, I’ve promised to use more executive actions to get things done without Congress.  My critics call this the “imperial presidency.”  The truth is, I just show up every day in my office and do my job.  I’ve got a picture of this I think.  (Laughter and applause.)  You would think they’d appreciate a more assertive approach, considering that the new conservative darling is none other than Vladimir Putin.  (Laughter.)  Last year, Pat Buchanan said Putin is “headed straight for the Nobel Peace Prize.”  He said this.  Now I know it sounds crazy but to be fair, they give those to just about anybody these days.  (Laughter.)  So it could happen.

But it’s not just Pat — Rudy Giuliani said Putin is “what you call a leader.”  Mike Huckabee and Sean Hannity keep talking about his bare chest, which is kind of weird.  (Laughter.)  Look it up — they talk about it a lot.  (Laughter.)

It is strange to think that I have just two and a half years left in this office.  Everywhere I look, there are reminders that I only hold this job temporarily.  (Laughter.)

But it’s a long time between now and 2016, and anything can happen.  You may have heard the other day, Hillary had to dodge a flying shoe at a press conference.  (Laughter and applause.)  I love that picture.  (Laughter.)

Regardless of what happens, I’ve run my last campaign and I’m beginning to think about my legacy.  Some of you know — Mayor Rahm Emanuel recently announced he is naming a high school in Chicago after me, which is extremely humbling.  I was even more flattered to hear Rick Perry, who is here tonight, is doing the same thing in Texas.  Take a look.  (Laughter.)  Thank you, Rick.  It means a lot to me.  (Laughter and applause.)

And I intend to enjoy all the free time that I will have.  George W. Bush took up painting after he left office, which inspired me to take up my own artistic side.  (Laughter.)  I’m sure we’ve got a shot of this.  (Laughter.)  Maybe not.  The joke doesn’t work without the slide.  (Laughter.)  Oh well.  Assume that it was funny.  (Laughter.)  Does this happen to you, Joel?  It does?  Okay.

On a more serious note, tonight reminds us that we really are lucky to live in a country where reporters get to give a head of state a hard time on a daily basis — and then, once a year, give him or her the chance, at least, to try to return the favor.

But we also know that not every journalist, or photographer, or crewmember is so fortunate, because even as we celebrate the free press tonight, our thoughts are with those in places around the globe like Ukraine, and Afghanistan, and Syria, and Egypt, who risk everything — in some cases, even give their lives — to report the news.

And what tonight also reminds us is that the fight for full and fair access goes beyond the chance to ask a question.  As Steve mentioned, decades ago, an African American who wanted to cover his or her President might be barred from journalism school, burdened by Jim Crow, and, once in Washington, banned from press conferences.  But after years of effort, black editors and publishers began meeting with FDR’s press secretary, Steve Early.  And then they met with the President himself, who declared that a black reporter would get a credential.  And even when Harry McAlpin made history as the first African American to attend a presidential news conference, he wasn’t always welcomed by the other reporters.  But he was welcomed by the President, who told him, I’m glad to see you, McAlpin, and I’m very happy to have you here.

Now, that sentiment might have worn off once Harry asked him a question or two — (laughter) — and Harry’s battles continued.  But he made history.  And we’re s proud of Sherman and his family for being here tonight, and the White House Correspondents Association for creating a scholarship in Harry’s name.  (Applause.)

For over 100 years, even as the White House Correspondents Association has told the story of America’s progress, you’ve lived it, too — gradually allowing equal access to women, and minorities, and gays, and Americans with disabilities.  And, yes, radio, and television, and Internet reporters, as well.  And through it all, you’ve helped make sure that even as societies change, our fundamental commitment to the interaction between those who govern and those who ask questions doesn’t change.  And as Jay will attest, it’s a legacy you carry on enthusiastically  every single day.

And because this is the 100th anniversary of the Correspondents’ Association, I actually recorded an additional brief video thanking all of you for your hard work.  Can we run the video?

THE PRESIDENT:  What’s going on?  (Laughter.)  I was told this would work.  Does anybody know how to fix this?  (Laughter.)

THE PRESIDENT:  Oh, thank you.  (Laughter and applause.)  You got it?

SECRETARY SEBELIUS:  I got this — I see it all the time.  There, that should work.

THE PRESIDENT:  Thank you very much, everybody.  God bless you.  And God bless America, and thank you, Kathleen Sebelius.  (Applause.)