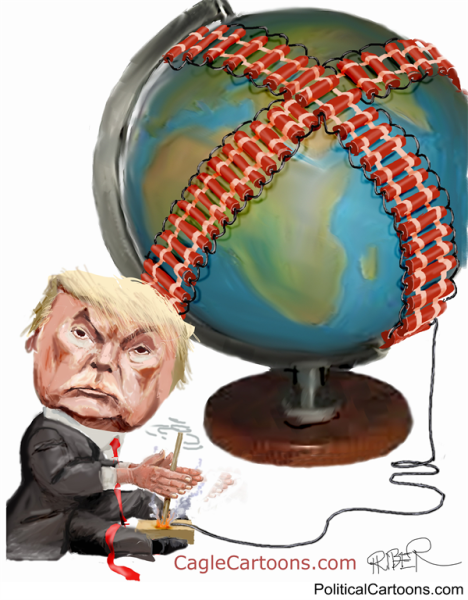 When a robot can run faster than you.﻿

Now they even can jump over our corpses﻿

Microwaves weapons will fry these metal motherfuckers. It's amazing what your microwave can do. SSSSHHHHH I've said too much.﻿
﻿
So when will they take over?﻿ И когда же они захватят власть?

People seem scared of these, I think they have great potential. Imagine being able to send them into search and rescue situations where it’s simply too dangerous for a person to go, or doing those tasks of health professionals that are under strain to free them up to be able to do their jobs more effectively. It’s merely a psychological thing, if another country wants to hurt you they can do that now with smart bombs not these robots.﻿

I can imagine this robot with a machine gun firing on innocents﻿.

34 seconds of play then gonna need 5 hours to charge... nothing to worry about﻿

It would be cool to get a non-hostile Atlas robot to go camping with. When none of my friends can go because they're too busy or whatever I can just bring my robo buddy and go on a hike, cook some meals, and feed him some oil. I can hunt some rabbits and he could do the skinning and cooking.
This looks really fake...﻿

This is going to destroy humanity.

Can’t be American, where is its gun?﻿

I just can’t wait until we get robotic chefs and maids.﻿

The best thing I've ever seen﻿

Now imagine one thousand of them, with guns…

Can it peel an onion﻿? Can it deliver pizza?﻿

Imagine you’re alone at night and walking down a street and this thing pops out and starts running towards you.﻿

It is impressive until the battery runs out 10 minutes later.﻿

Since there are two cuts in this video it means this ugly, scary thing fell down and broke at least 6 times - every time before and after each footage part! :D Nothing to worry about still!! :D﻿
Westworld coming soon in real life﻿.
Imagine an army of these guys with guns marching down Times Square with no prior warning.

Well, this is terrifying…﻿
﻿
Time to nuke Boston Dynamics.﻿

How long/far can it run on a full charge?﻿
﻿
FFFFFFFFAAAAAAAAKE﻿

So these are the soldiers of the future, killing without any hesitation or second thoughts, just following the algorithm.﻿

Don't worry about robots people they are easy to defeat. Start with paint balls shot into their optics so they can't see anything, they won't be able to wipe it off either. Next throw a net over them and enjoy them trying to escape it. Just wait a little while until they run out of battery which won't be long, trust me. Jam the radio frequency they are using or better yet just take over remote control. Lasso them and drag them behind your car. Trust me they are no terminators, so don't sweat it. Set out magnetic IED's for them. Lots more ways to take them down if you think about it. Get them to walk into deep mud or wet cement. Dig a dead fall trap for them and lead them into it. Use armor piercing rounds and shoot out one of their legs. Light up some thermite on them.﻿
IED = a simple bomb made and used by unofficial or unauthorized forces.
thermite ['θɜːmaɪt] - термит
The end is near﻿

I think they would make better policemen in the future due to zero worries about getting killed. Unless they are hacked.﻿

You just need make it learn how to use a gun then we have a new Terminator movie!﻿


Is it just me or does this look a bit cgi? I know it’s not but for some odd reason I see the robots movement and lighting out of place.﻿
CGI [siːdʒiːˈʌɪ] - computer-generated imagery
(special visual effects created using computer software)
This is brilliant!!!...well done to Boston Dynamics.﻿

This robot can be used in dangerous places. A worker robot can be working day and night, no insurance, does not complain, a slave robot.

The war with machines is coming soon I always knew Terminator was a true story!﻿
If this thing starts acting cute, just fry its circuit with a well-placed EMP grenade.﻿