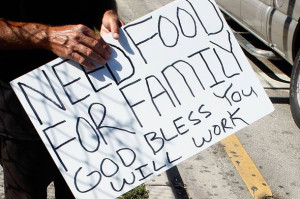 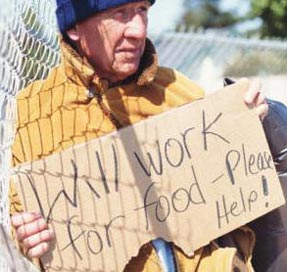 
[Hunger Threatens One in Seven Americans]

The United States Department of Agriculture just released a report on the problems that Americans have getting food. The report says that one in seven U.S. families last year did not have food security - the ability to get healthy food. This rate has not changed since 2012. It is only a little less than the rate at the end of the recession in 2009.
“It is the highest food insecurity rate that we’ve seen,” said Alisha Coleman-Jensen, who helped write the report. She added that the rate of food insecurity is unusual because the number should go down when the economy gets better.
“I have a million-dollar question: Who’s recovering? Because I’m not seeing the population that’s recovering,” said Wessita McKinley. She aunched a group called Sistas United. It gives food and other help to people near Washington, DC.
Wessita McKinley says there are two times as many people coming to her for help now compared to before the recession.

It is not only jobless Americans who are having problems. Feeding America is a nationwide organization of food banks. These groups give away food to those in need. Feeding America found that 75 percent of the people it helps have jobs.
“It doesn’t matter if you work or not. You just don’t have enough money to survive,” says Grace Davis. Ms. Davis receives help from Sistas United. She teaches in a program for the children of prisoners. But her job does not pay much. She said that she recently did not have enough food to make breakfast for herself and her son. “So I said, ‘Well, I’ll save the eggs for him.’ And I just drank water and ate bread.”
The Department of Agriculture found that Ms. Davis is like people in seven million families that gave up food for one person last year. That number has not changed since 2009.

A major reason for food insecurity is the cost of food. Ms. Coleman-Jensen says the rate of inflation has been low in recent months. But the price of food has been rising faster than other things. At the same time, an Economic Policy Institute study found that wages have not gone up, especially for American workers whose pay is low.
“After you pay your electric bill, your car (payment), put gas in your car, you don’t really have extra money for
food,” said Sarah Auth. She receives help from Sistas United.
As she notes, “If you try to eat healthy, healthy food is very expensive.”
But even food that costs little can be pricey over a long time, says Nancy Roman. She heads the Capital Area Food Bank in Washington. She explains that people who don’t eat healthy food may face an increased risk of diseases such as diabetes and heart conditions.
Feeding America found that 58 percent of families they talked to have someone with high blood pressure, and 30 percent have a person with diabetes.
At Sistas United, Wessita McKinley said she has seen people doing all they can to avoid hunger, such as suicide, stealing and other crimes.