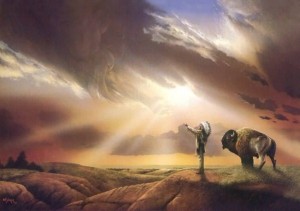 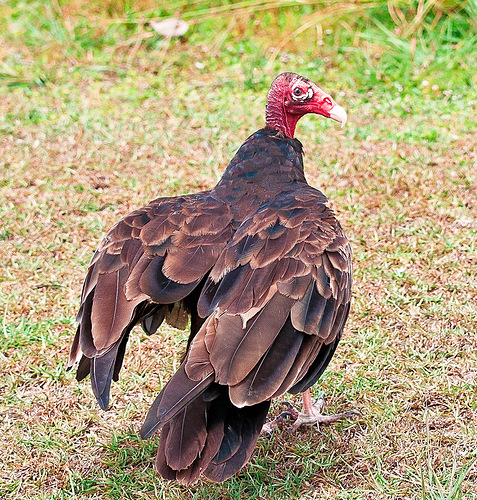 Американский гриф - buzzard
[Creation Story:]
Many, many moons ago, in the beginning of time, the earth was all water. There was no land. And all animals, all birds and insects, lived up in the sky on the clouds. They were waiting for the land to dry, but it would not dry. They would send one animal down, but he would come back unable to find dry land. The animals would regularly check the water below. Finally, after a dog had looked and reported back that it was still wet, they sent the water beetle. The water beetle dove into the water, grabbed a handful of mud at the bottom, brought it up and placed it on top of the water and it started to dry, started to build land. He brought more and more and still they waited for it to dry, still they waited and waited.
Finally, they sent grandfather buzzard, the mighty buzzard, down and the land was almost dry.

The buzzard flew close to the land and every time he would flap his mighty wings, he would form a mountain and a valley. That’s why the Cherokee land has mountains and valleys in it today. All the animals came down and settled on the earth.
After they did, they realized they had no light. So they called to Grandfather and asked him to give them light, and he did. He brought to them the sun. He put the sun down right by the ground, and it was too hot for the animals. So they pushed and pushed, till finally they got it far enough out that it would not burn all the time; but it was still so hot that the crawfish was baked. That’s why, if you look at him today, he is red from the sun being too close.
crawfish - рак
Finally, they got the sun far enough out so it would not burn and we would have night. And Grandfather told them, “Now that I have done this for you, I ask that all the all the animals and all the plants stay awake for seven days and for seven nights.” This is why today, when a warrior goes to cross his manhood, he fasts and sweats for seven days.
All the animals and all the plants fell asleep except for some. The owl stayed awake, and that’s why he has vision to hunt at night now. The plants, the cedar, the pine, and a few others stayed awake for seven nights and for seven days. That’s why only these, among all the plants, are allowed to stay green all the year round. The other plants fell asleep and so must sleep part of every year.
Such was the beginning of our lands as told by a Cherokee grandmother to her grandson.
Adapted from: http://nativeamericanencyclopedia.com/tsalagi-creation-story/
Tags: native americans, ИЗУЧАЮЩИМ АНГЛИЙСКИЙ, ФАУНА, ФЛОРА
Subscribe
promo