A DAY FOR FOOLS

We have recently received several comments from listeners that we speak too slowly. So starting today, April 1, the VOA Learning English staff will read all articles much more quickly. Like this. We hope you enjoy our new style.
staff [stɑːf] – штат
to enjoy [ɪnˈdʒɔɪ] – нравиться
In the news today, the UN International Civil Aviation Organization reported “significant safety concerns” with Thailand’s air safety practices last week.
significant safety concerns – серьёзная обеспокоенность
по поводу безопасности
The negative report may prevent some flights from coming out of the kingdom and forced Thailand’s government to deal quickly with the results on Monday.
to prevent from – не дать (сделать что-либо);
не позволить  (совершиться чему-либо)
…
Just kidding! April Fools!
to kid – шутить
Kidding! – Шучу!
Every year on April 1, April Fools’ Day is celebrated in many countries around the world.

[GO ON LISTENING AND READING]
In France, it’s called Poisson d’Avril or “Fish of April.” In Scotland, the holiday is often called “Gowkie Day.”  In Iraq, the holiday is called Kithbet Neesan or “April Lie.”
History experts say people have celebrated April Fools’ Day for a long time. Some believe the tradition comes from the ancient Romans more than two thousand years ago. It was a day of playing games and pretending to be someone else.
to pretend [prɪˈtend] -
притворяться
Others say the day for fooling began in France in 1564, when King Charles changed the yearly calendar. He moved New Year’s Day from April 1 to January 1. Many people did not know about the change because of communication problems back then. Some people continued to celebrate New Year’s Day on April 1. Other people called them April Fools and played jokes on them.

In the United States, April Fools’ Day is just a day of joking and playing tricks on friends. These kinds of jokes are also called pranks. These jokes  typically end in the prankster shouting “April Fools’!”
prank [præŋk] – розыгрыш,
практическая шутка
Simple pranks, like telling a friend a funny lie or making prank phone calls, are still common. But, major companies also get in on April Fools’ Day fun in a much bigger way.
to get in on – заняться,
быть вовлечённым, участвовать в
A few years ago, on April 1, Starbucks announced it was introducing new coffee cup sizes - Plenta and Micra. The very large cups, bigger than a human head, remained useful for customers even after finishing all that coffee.  According to Starbucks, the cups could be used as a rain hat, a pot for plants, or a lampshade.
It did not take long for customers to catch on to the prank!
to catch on – понять, «врубиться» 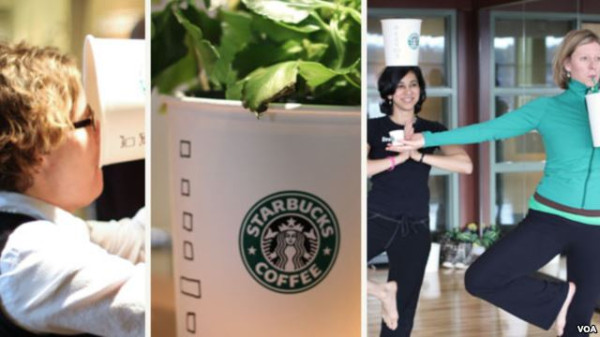 More and more, people use social media or smart phone apps to play pranks on their friends on April Fools’ Day. One very annoying smart phone app, Cat Facts, sends funny facts about cats to your friends’ phones, every day.

And sometimes, simple, more traditional April Fools’ pranks go viral on social media.
viral [ˈvaɪərəl] – вирусный;
сверх популярный
Last year, a class of college students in the U.S. state of Michigan played a prank on their professor. The professor had a classroom rule that, if a student’s phone rings during class, the student must answer it using the speakerphone. This means the whole class gets to listen to the conversation.
speakerphone – громкая связь
One student decided to teach the professor that his rule could be dangerous. She planned for a friend to call her, pretending to be someone from the Pregnancy Resource Center.
pregnancy [ˈprɛgnənsɪ] - беременность
On speakerphone for the whole class to hear, the friend announced the news that the student’s recent pregnancy test was positive. The professor quickly got embarrassed and told the student she should turn off speakerphone.
to embarrass [ɪmˈbærəs] – смущать,
приводить в замешательство
The student responded, “That’s okay. I’ve been expecting this. I already know what I’m going to name the baby. The first name will be April, and the middle name will be Fools!”
The professor, of course, quickly caught on to the joke, and was quickly relieved!
to be relieved [rɪˈliːvd] –
почувствовать облегчение
The social media-savvy students posted a video of the classroom prank on YouTube. One year later, the video has more than 38 million views.
savvy [ˈsævɪ] – знающий толк,
понимающий, разбирающийся в
Do you have any ideas for April Fools’ Day pranks?
Have your friends played pranks on you before?
Tell us about one in the comments section!
Words in This Story
pretend – verb (глагол). to act as if something is true when it is not true
prank – noun (имя существительное). a trick that is done to someone usually as a joke
prankster – n. a person who likes playing pranks.
get in on – phrasal verb (фразовый глагол). to become involved in
catch on – phrasal verb. to understand what is meant or how to do something.
viral – adjective (имя прилагательное) relating to or involving an image, video, piece of information, etc., that is spread rapidly and widely from one Internet user to another.