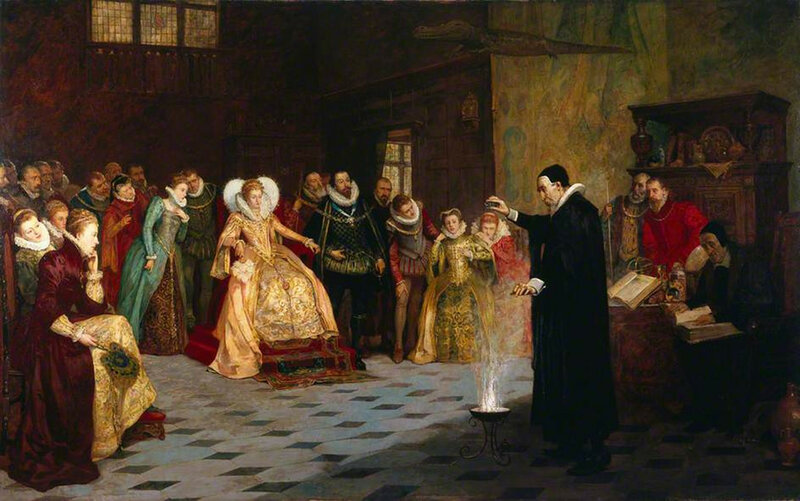 [IN ENGLISH]
A Painting of John Dee, Astrologer to Queen Elizabeth I, Contains a Hidden Ring of Skulls
skull [skʌl] - череп

This  painting by Henry Gillard Glindoni shows John Dee (the figure in black) performing an experiment in front of Queen Elizabeth I.
A recetnt x-ray analysis of the oil painting shows John Dee surrounded by human skulls.

The picture was painted between 1852 and 1913. Why the original image was painted over is not very clear. Perhaps, it was too creepy, occult and spooky for the Victorian public.
creepy [ˈkriːpɪ] - жуткий
spooky [ˈspuːkɪ] – зловещий, жуткий
Glindoni had to to make it look august and serious.
august [ɔːˈgʌst] - величественный
John Dee was a philosopher, mathematician and alchemist. He alao was the Queen's advisor and astrologer. John Dee mixed science and the occult and believed he spoke to angels.

He also collected a massive library. His collection included books on love, history, astrology, alchemy and more. Many of the books have notes in Dee's own hand. One book on mathematics has a Latin inscription describing Dee's stay in "the house of my singular friend." Dee speaks of the period he spent under house arrest with Edmund Bonner, the bishop of London. Dee was placed there after a letter he wrote to Elizabeth, predicting that Queen Mary Tudor I's reign would soon end. The letter was intercepted by Mary's spies.
John Dee was one of the first experts on the occult and was once arrested by Queen Mary Tudor on the charge of trying to kill her using magic.