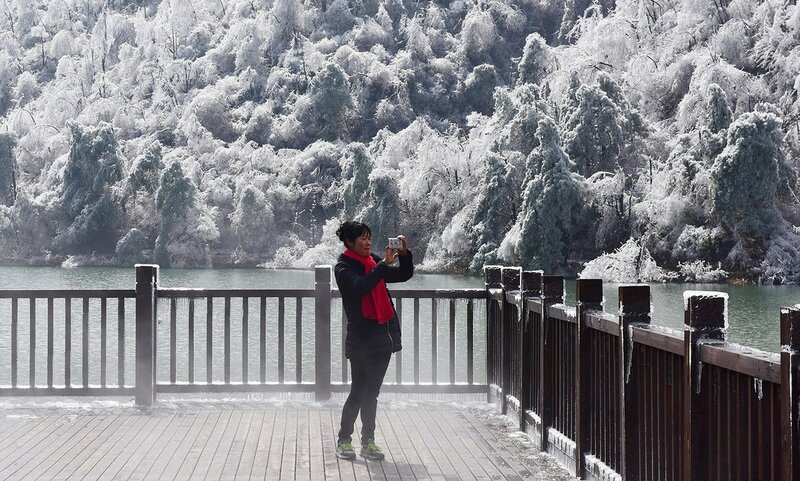 [IN ENGLISH:]The Guardian writes:
At least 95 people die because of record-low temperatures in east Asia.

A woman photographs the scene in eastern China, in Inner Mongolia, where the temperature fell to a record low of -46.8C
Celsius [ˈsɛlsɪəs]


The southern Chinese city of Guangzhou, which is by the tropic of Cancer, saw sleet for the first time in 60 years, the local meteorological station said.
sleet – снег с дождём, ледяной дождь
The cold was caused by a polar vortex, a large cyclone that pushed south from Siberia, which is highly unusual for east Asia.
polar vortex – полярный вихрь, полярная депрессия

In Hong Kong primary schools and kindergartens were closed on Monday after temperatures fell to 3C (three degrees Celsius), a 60-year low.

Bangkok is the planet’s hottest city by the World Meteorological Organisation for its mean (средняя) air temperature is 28C. In Bangkok the temperature dropped to 16C on Monday. This is unusually cool for the local residents. They feel cold and put on warm clothes which they wear when they go skiing far away from home.

Hundreds of flight cancellations left tens of thousands of holidaymakers stranded in South Korea, after the biggest snowfall in three decades closed the airport on the resort island of Jeju.
to be stranded [ˈstrændɪd] - застревать
In China, 24 weather stations recorded all-time low temperatures. In Inner Mongolia the temperature dropped to a record low of -46.8C. In China’s eastern city of Qingdao, fishing boats were stuck fast in the frozen waters. => лодки рыбаков намертво сковал лёд

The weather ruined many people’s travel plans for the Chinese lunar new year season, when families normally travel to their home towns.