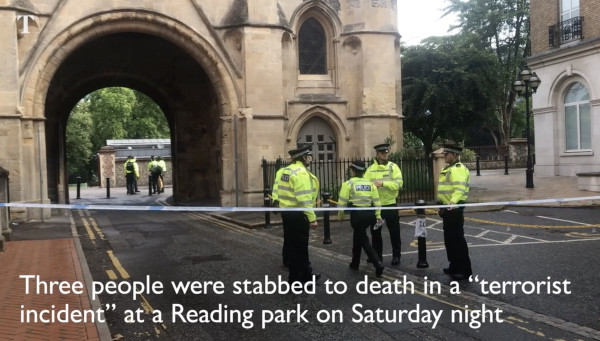 The town of Reading is in the English county of Berkshire in the south of England.

First, we need to learn to pronounce these place-names – Reading and Berkshire:

See? The place-name Reading is not pronounced as the word reading in She is reading a book. And the place-name Berkshire starts with bark as in Dogs start to bark at nightfall in the neighbour’s back yard.

And now to the news itself.

There has been a stabbing incident in Reading. Three people have died and three more have been seriously injured.

Counter-terrorism officers have been called.

A 25-year-old man has been arrested at the scene. He is thought to be Libyan.

Police have asked anyone with mobile phone footage of the attack to come forward.

Two witnesses have come forward with information on/about the incident.

A man has attacked people in Reading today.

It was a stabbing incident.

The attacker stabbed people with a knife.

He has wounded several people.

Police have arrested the attacker at the scene of stabbings.

The attacker has been arrested.

It is not clear at the moment if there is mobile phone footage of the attack.

Police have asked if anyone has mobile phone footage of the attack.

Police have asked people to come forward with any information on/about the stabbing attack they may have.